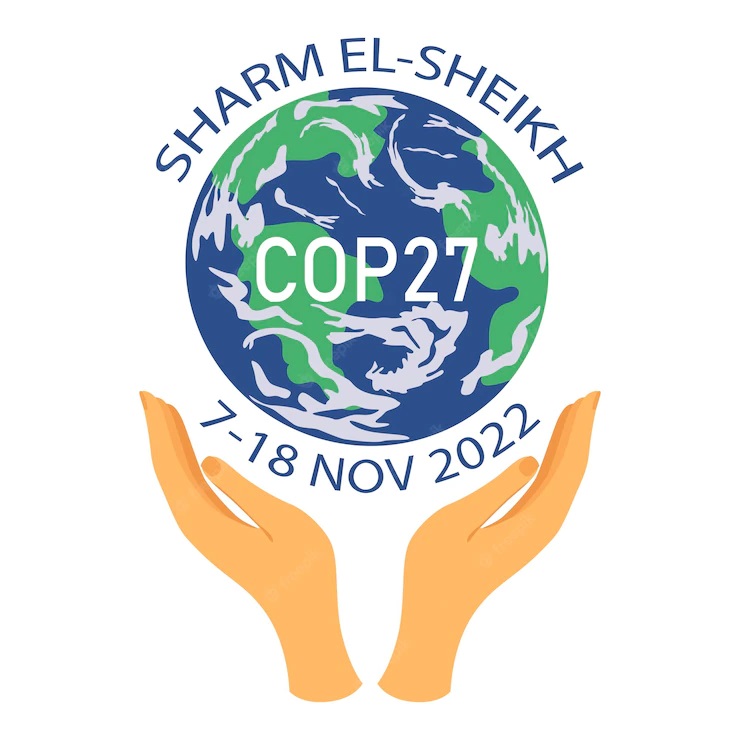 * CoP27 will be about moving from negotiations and planning to the implementation of promises and pledges made * Current pledges could put the world on track for around 2.5 degrees Celsius of warming by the end of the century * India’s actions are highly insufficient

The 27th round of the Conference of Parties, or COP27, will be held from November 6-18 in the Egyptian city of Sharm ElSheikh where leaders of 200 countries will gather for the event. There are enormous expectations from the annual summit in deliberating and deciding on a credible global action plan to respond to the increasing threat of climate change.

The summit comes at a crucial juncture as the state of the globe is dismal against the backdrop of global inflation, energy, food and supply chain crises, fuelled by an ongoing war in Ukraine and exacerbated by extreme weather events. To top it, the various measures taken by champions of growth and stability fall largely insufficient.

Several topics will be at the central stage of discussion at the CoP27, such as focusing on efforts to decarbonise at a faster pace, finance climate action measures, and other issues related to food security, energy and biodiversity. The event will have to carry on the baton from the last version of CoP toward more comprehensive and steadfast measures.

We look at the present state of the globe in its efforts toward climate resilience on the eve of the CoP27 summit.

The climate change effects became more visible since the last meet. Extreme weather events are increasingly becoming the new normal. The scientific reports are a stark reminder of the devastating impact of human pressure on the climate and the inefficiency of existing plans. Some of these reports are likely to make an impact on the political agenda and environmental diplomacy, leading up to the Egypt summit.

Important reports by a few of the most credible entities are worth noting. Mitigation measures to keep temperatures below 2°C and the need for climate change adaptation mentioned in these reports are likely to come up for discussion at the COP27.

As per the latest report of the UN Climate Change, the curve of global greenhouse gas emissions is bending downward, thanks to the efforts the measures taken by countries across the globe. Yet, the report underlines that these efforts remain insufficient to limit global temperature rise to 1.5 degrees Celsius by the end of the century. It further adds that the combined climate pledges of 193 Parties under the Paris Agreement could put the world on track for around 2.5 degrees Celsius of warming by the end of the century. A scenario that may be catastrophic.

The world is failing to act with urgency to curb greenhouse gas emissions despite the planet witnessing climate-enhanced heatwaves, storms and floods after just existing 1.2°C of warming.

IPCC Sixth Assessment Report assesses the impacts of climate change, looking at ecosystems, biodiversity, and human communities at global and regional levels. It also reviews vulnerabilities and the capacities and limits of the natural world and human societies to adapt to climate change. The report stated that climate change has produced irreversible losses to natural ecosystems. It warned that if carbon emissions from human activity are not sharply reduced, the world will witness severe consequences to food supply, human health and biodiversity loss.

The report further states that 3-14% of all species on earth face a very high risk of extinction at even 1.5°C, a goal of limiting temperature rise from pre-industrial levels. Beyond that, it will be devastating at unprecedented levels.

To limit to around 1.5°C, global greenhouse gas emissions need to peak before 2025 and be reduced by 43 per cent by 2030. Coal-fired power plants which are operating without technology to capture and store carbon must cease to operate. This is a significant warning to countries like India, which operates roughly 10 per cent of global capacity.

“We had our chance to make incremental changes, but that time is over. Only a root-and-branch transformation of our economies and societies can save us from accelerating climate disaster,” said Inger Andersen, Executive Director of UNEP.

The report gives a comprehensive picture of global efforts and their significance. According to the report, the national pledges taken by countries since last year only make a negligible difference to predicted 2030 emissions.

Unconditional and conditional NDCs (Nationally Determined Contributions) are expected to reduce global emissions by 5% and 10%, respectively, by 2030, when compared to current policies. To be on the most cost-effective path to limiting global warming to 2°C or 1.5°C, these percentages must reach 30% and 45%. With existing policies, the temperature will still rise by 2.8°C by the end of this century.

The top 7 emitters (China, the EU27, India, Indonesia, Brazil, the Russian Federation and the United States of America) plus international transport accounted for 55% of global GHG emissions in 2020. The G20 members are responsible for 75% of global emissions.

Since the inception of CoPs back in 1995 in Berlin, a few COPs have stood out with historic agreements. For instance, the famous Kyoto Protocol, adopted at COP3 in 1997, recognized that developed countries are principally responsible for the current high levels of GHG emissions in the atmosphere as a result of more than 150 years of industrial activity.

Similarly, COP21, another significant conference, ended with the 2015 Paris Agreement in which member countries agreed to keep global warming below 2°C, ideally no more than 1.5°C, compared to pre-industrial levels.

The latest Conference of Parties, CoP26, event of 2021 at Glasgow, ended with the Glasgow Climate Pact that called for the ‘phasing down’ of unabated coal power.

These annual conferences have been the main driver of the global fight against climate change. However, the response so far has not been in line with the enormity of the challenge. Although the global community took incremental remedial measures, they are slow, even as the impacts of global warming have been unfolding at a very rapid rate.

It has been over at least two and a half decades since the world decided to limit GHG emissions for the first time. Yet, the policymakers due to ideological or political differences failed to take any stern action and make a considerable impact.

The rich and industrialised countries have not met their collective targets, while developing countries like China or India, which were not major emitters till sometime back, have seen their emissions rise steeply.

The US was the world’s leading emitter till the mid-2000s, after which China overtook it. The US has been a major laggard, cutting its emissions by only about 7 per cent from 1990 levels.

As a bloc, the European Union has done relatively better on climate goals. The United Kingdom halved its emissions from 1990 levels. China’s emissions have risen by almost four times. Current global emissions are more than 50 per cent higher than in 1990.

India saw an increase of about three times since 1990. The South Asian country, also the third largest GHG emitter in the world, is one of the 197 countries that has promised to limit the increase to no more than 1.5°C by 2030. It is also working on a long-term roadmap to achieve its target of net zero emissions by 2070. At the Glasgow summit, India committed the country would get its non-fossil energy capacity to 500 GW by 2030, meet half of its energy requirement from renewable sources, and reduce carbon emissions. 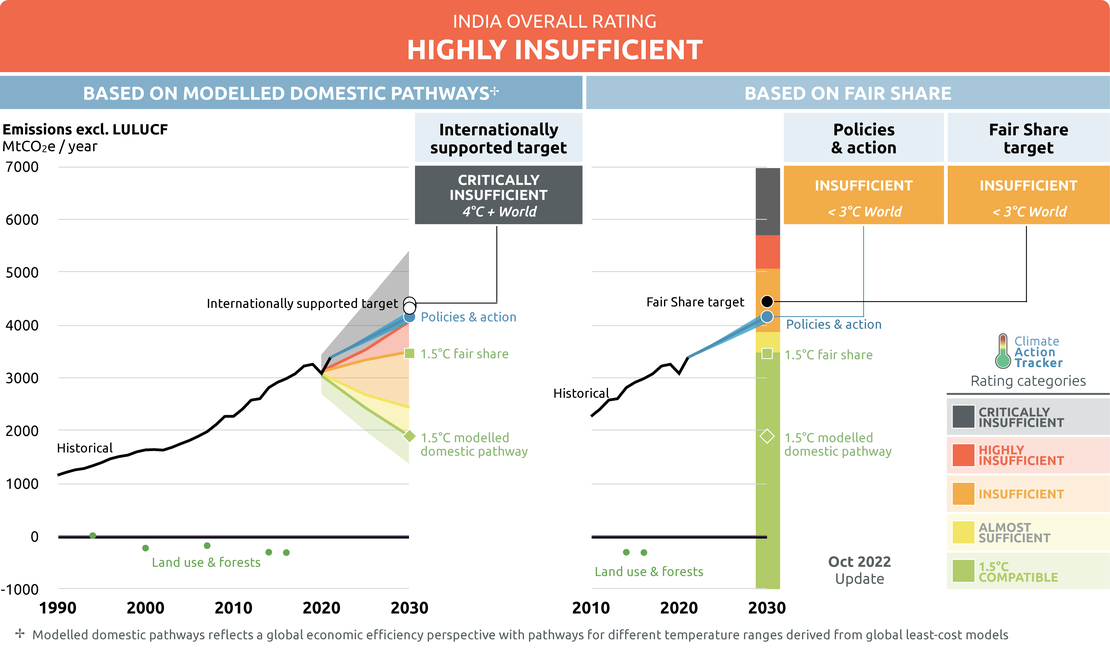 Unsurprisingly, few experts have slammed India for not setting ambitious targets. The Climate Action Tracker, an independent analysis that tracks government climate action classified India’s action as highly insufficient. India’s continued support to the coal industry is highly responsible for this as the country also came under intense criticism over its stand to “phase down” coal power, instead of phasing it out, at COP26. Nevertheless, India will have a critical role to play at COP27.

CoP27 is expected to further deliberate on the evergreen topic of whether wealthy nations emitting carbon dioxide should compensate for the loss to developing countries with a lower carbon footprint, and strengthen a global response.

The upcoming summit seeks to accelerate global climate action through emissions reduction, scaled-up adaptation efforts, and enhanced flows of appropriate finance through its four priority areas of mitigation, adaptation, finance and collaboration. As per its Presidency Vision statement, CoP27 will be about moving from negotiations and planning to the implementation of promises and pledges made. The event, with less than a week to go, will be crucial for the fate of humanity. 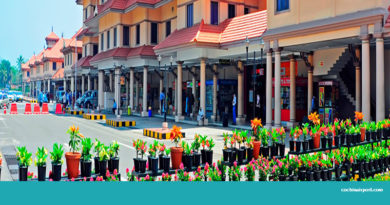 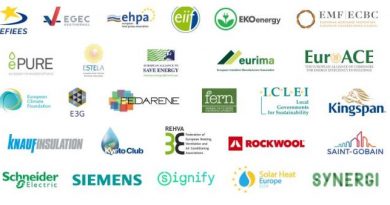 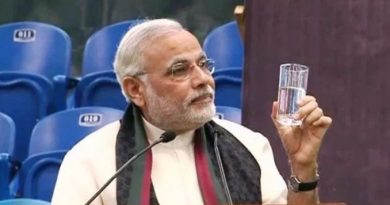