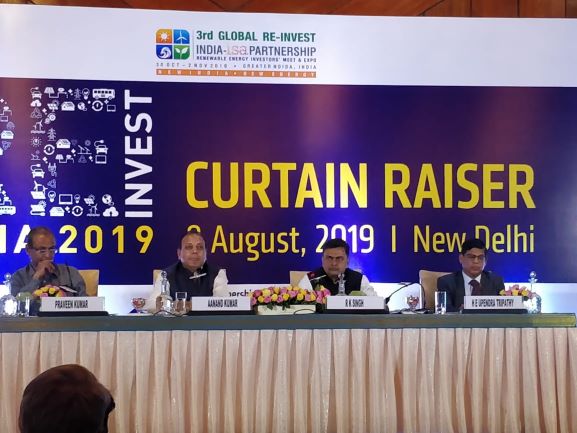 The curtain-raiser for the third edition of Re-Invest saw some announcements made by the MNRE Minister and Secretary.

The curtain-raiser of Re-Invest 2019 had MNRE Minister R K Singh, MNRE Secretary Aanand Kumar and ISA chief Upendra Tripathy addressing the delegates from various countries and media to announce the event which is due to be held in Greater Noida from October 31.

The Re-Invest event will coincide with the second assembly of the International Solar Alliance ISA on 2nd November and the objective of the even will be to attract new investment to the Indian renewable sector as well as ISA countries while sharing new ideas with the member nations.

In his opening address, Secretary of MNRE Aanand Kumar spoke about the growth story of India’s RE target which increased from 100 GW to 175 GW and also informed that 80 GW has already been installed and will exceed the target.

Allaying fears of the investors present, Kumar said that the power purchase agreement (PPA) matter with Andhra Pradesh is being dealt with. “We have resilient judicial systems, the PPAs which are already signed are sacrosanct and should not be revisited unless there is a specific clause to do so in the agreement or if there is a case of malafide corruption,” he added and said that the government will protect investors’ investment and the MNRE is looking at the LCs so that the investors do not face the problem of delayed payments.

He also pointed out that there is an opportunity to attract additional $35 billion dollars into the renewable energy space and India is trying to make ‘tweaks’ and adjustments in the policy to smoothen the path.

The MNRE s\Secretary and the Minister repeatedly emphasised that India offers one of the largest investment opportunities in the renewable space as the Government of India allows 100 percent FDI under the automatic route for projects of renewable power generation and distribution.

Minister RK Singh added that the ministry is trying to improve the country’s ease of doing business index and that element of innovation is the driving force behind India’s renewable energy dream. “This is a new sector and every year our ministry is trying something new. Starting with solar then floating solar, then hybrid, then hybrid with storage, then offshore, then to the highest solar fields of the world in Ladakh. So every year or every three months or so, we come up with a new idea,” Singh said.

He said that this event will encourage players and other stakeholders to come with new ideas and share it with the world. “RE-INVEST will provide the courage to invest in those new ideas,” Singh added.

Some announcements made during the curtain-raiser were:

The 2nd Global RE-INVEST, was held from 2-5 October, 2018 and was aimed at accelerating the worldwide effort to scale up renewable energy and connect the global investment community with Indian energy stakeholders. The 45 in-depth sessions featuring 220 speakers over the 3 days of the conference saw animated exchanges on various topics which brainstormed on expanding India’s RE market in the face of aggressive global competition.


"An idea for a water related science project? Participate in the Stockholm Junior Water Prize-India, and it could open up the world for your ideas!" Visit to sjwprize.com
Tags: Aanand Kumar | Curtain Raiser | ISA | MNRE | RE-Invest 2019 | RK Singh | Upendra Tripathy