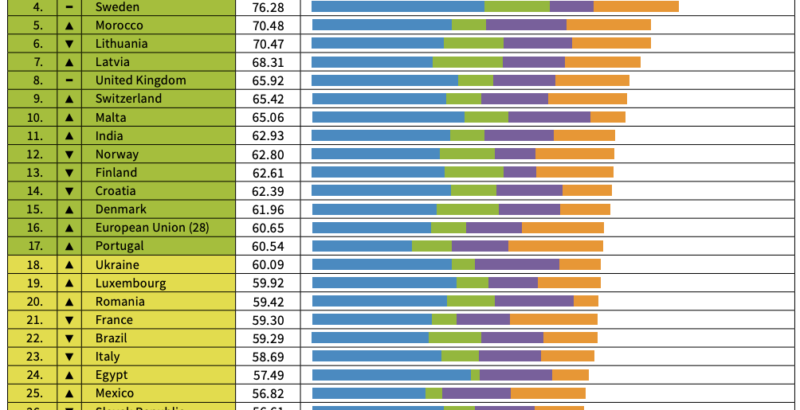 The Index is an annual publication by GermanWatch, New Climate Institute, and Climate Action Network Europe. With no country making it to the 'very good' commitment level reserved for the top three rankings, India effectively ranks 8th worldwide.

India’s performance in the renewable energy sector has been hailed in a new global report on climate change, the Climate Change Performance Index (CCPI) 2019, published by Germanwatch in collaboration with the New Climate Institute and the Climate Action Network (CAN). 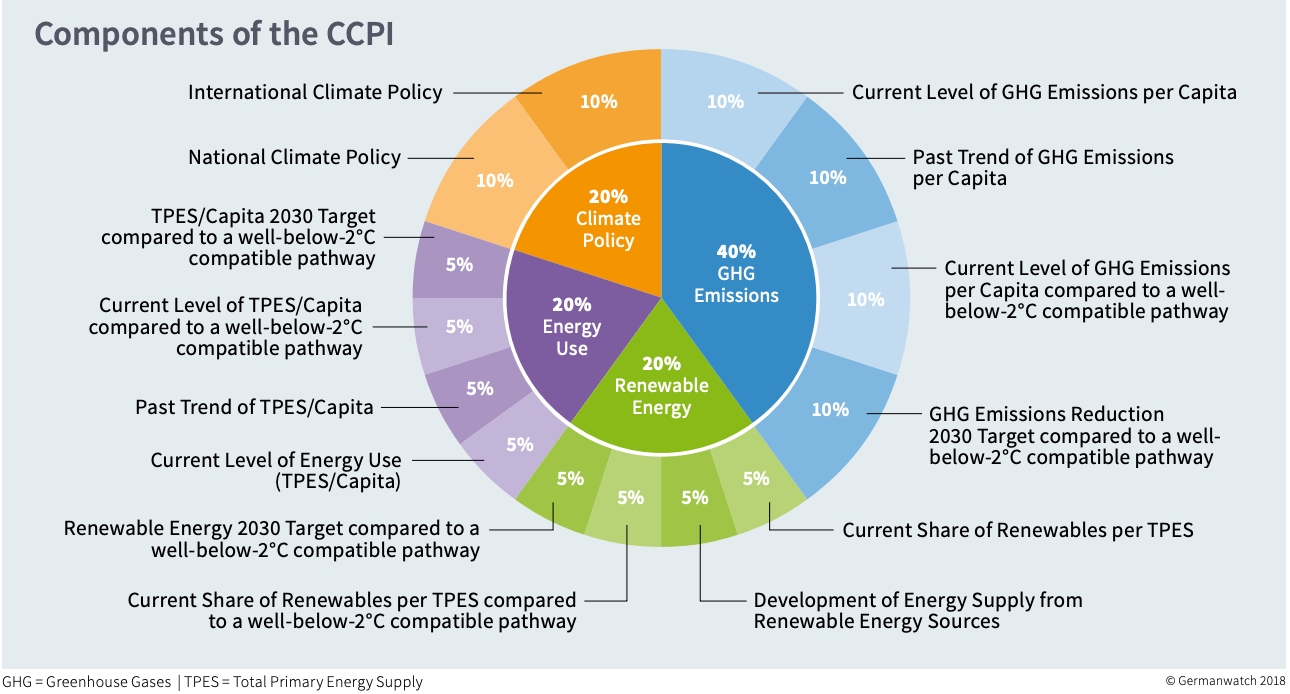 The report, launched on the sidelines of COP24, followed PM Narendra Modi’s ambitious goal that India must start generating 40 percent of its total power from non-fossil fuels by 2030, thereby placing India at a premium position on the international renewable energy map. However, experts warn that the continued dependence on coal right upto 2040 and beyond might affect the country’s future improvement. 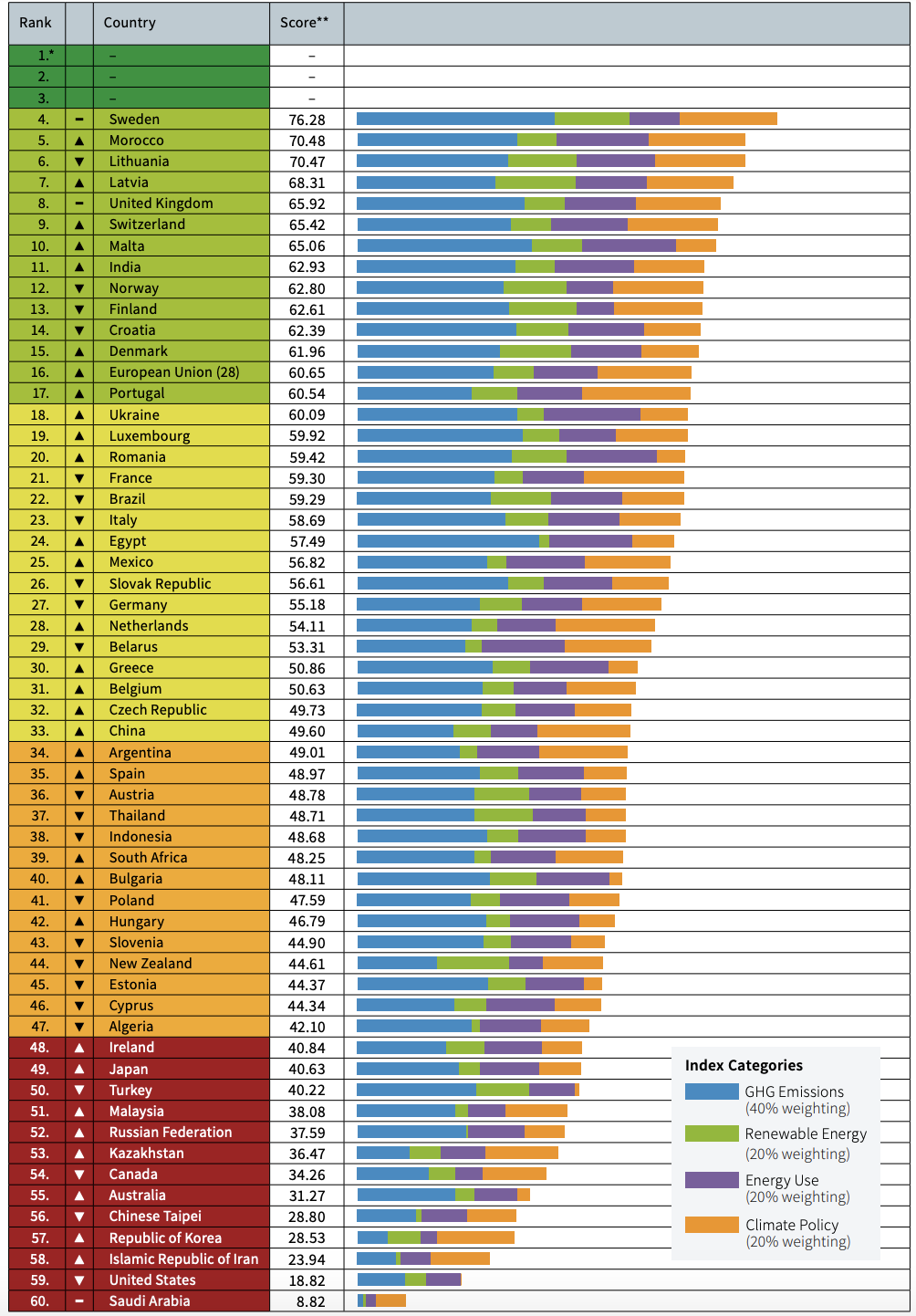 The report, which shows only a few countries have started to implement strategies to limit global warming below 2 or even 1.5 degree Celsius, revealed that no country performed well enough to reach the ranking “very good” in this year’s index, meaning that no country made it to one of the top three places in the rankings. With comparably good ratings in emissions and renewables, Sweden leads the ranking (4th), followed by Morocco that significantly increased its share of renewable energy capacity and has an ambitious national climate target.

The rankings based on the sub-category of GHG emissions revealed that while Sweden had the highest scores, of all the G20 countries the United Kingdom and India were the best performers. While Saudi Arabia and the United States plagued by Trump’s agenda against Renewables finished last on the list. Complementing the results we found in CDP’s top 100 CO2 emitters, that the United States comes out way ahead of the rest with more than a quarter (27) of the 100 companies, having a base in the states. Also, finishing at the bottom of the pile with the lowest score in the Climate Policy sub-category. A very dire state of conditions for the United States.

Saudi Arabia maintained its position at the bottom of the CCPI. A very low performer in all index categories and on every indicator for Emissions, Energy Use, and Renewable Energy. Although the government is taking steps to expand renewable energy, it has not adopted emission reduction targets along with the country’s very low performance in international negotiations.

The report warned that after three consecutive years of stable CO2 emissions, global emissions are rising again. While there is a continued growth and competitiveness of renewable energy, especially in countries that had low shares before, the CCPI shows a lack of political will of most governments to phase out fossil fuels with the necessary speed. “Because of that, in most countries, the climate policy evaluation by national experts is significantly lower than in earlier years,” it said.

Jan Burck, co-author of the CCPI at Germanwatch, said, “Based on techno-economic developments in the last years, delay in implementation of low-carbon solutions can hardly be justified. While the G20 summit has shown strong support of 19 countries to support the Paris Agreement, the political will of those governments to set the right frameworks and incentives for its national implementation is not yet reflected in these words.”

Saudi Arabia, one of the world’s leading oil exporters is also among the worst polluters on most parameters, bringing home just how starkly the kingdom has resisted calls to reform and adapt its economy to the new global reality.  Even China, thanks to its massive ‘scale at any cost’ manufacturing push, ranks poorly on GHG’s, making it clear that diffreent countries will have their own reasons to push the limits of acceptable baheviour, or beyond. It’s a price that everyone is paying for , and highlights just how tough and critical it is to arrive at formal, multilateral commitments that can be enforced in some way.