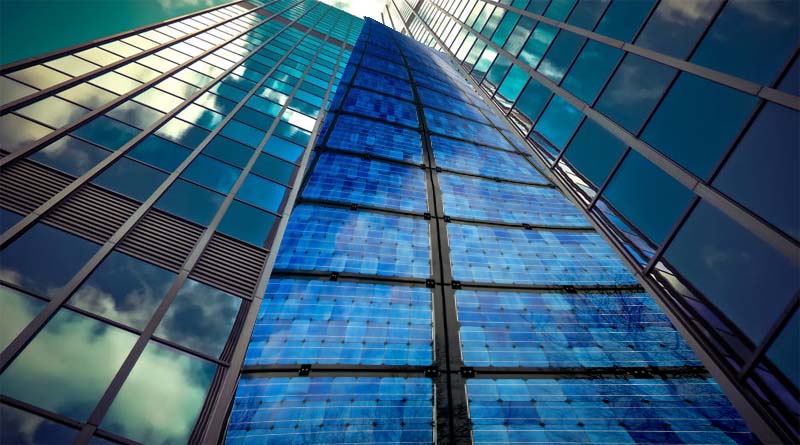 It has always been an area of vast interest for architects and scientists alike to find a more useful and effective replacement for common glass in buildings. Solar panels were always an ideal option, except for technological issues.  Many versions of such panels have been tried and developed such products but they often fall short on either efficiency or the opaqueness of the panels. For a fast emerging economy like India, where over 80% of the likely buildings we will have in 2050 are yet to be made, a breakthrough could be really useful, as seemingly nothing will prevent the obsession with glass façade buildings, despite their inadequacies for the climatic conditions here.

This week in the scientific journal ‘Joule’, there was a report that opens up a new window of hope for a breakthrough. Scientists from the Michigan State University led by Richard Lunt claim to have developed a UV-absorbing perovskite solar window with an efficiency of 0.5%.

For a brief understanding of perovskite, it is a new class of opaque solar cell materials. They are closing in on silicon-based panels which are currently the primary raw materials of the solar panel industry. Not only are the perovskites cheaper than silicon, they can also be tuned to absorb specific frequencies of light by tweaking their chemical recipe and have so far achieved efficiencies of 20%, behind silicon-based panels which have reached maximum efficiencies of 27 %.

The window panels developed by Lunt’s team have a seemingly low efficiency at only 0.5% but what they believe will be enough for the first batch of panels. The panels will serve the purpose of being windows that are clear while storing enough energy to operate another window technology: on-demand darkening glass that halts intense light in the heat of the day, thereby reducing a building’s need for air conditioning.

Lunt’s team believes that they a clear path to achieve efficiencies of 4% in the next few years. At that rate, the cells could power some of the building’s lighting and air conditioning.

At the other end of the spectrum is infrared light, which strikes Earth’s surface more intensely than UV light and can, therefore, generate more electricity. Last year, in Nature Energy, Lunt’s team reported it had made transparent, UV- and infrared-absorbing cells with efficiencies of 5%, using “organic” photovoltaics—thin film sandwiches of organic semiconductors and metals. Lunt says future systems that yoke UV-capturing perovskites to infrared-capturing organics could reach efficiencies of 20%, while still being nearly entirely transparent.