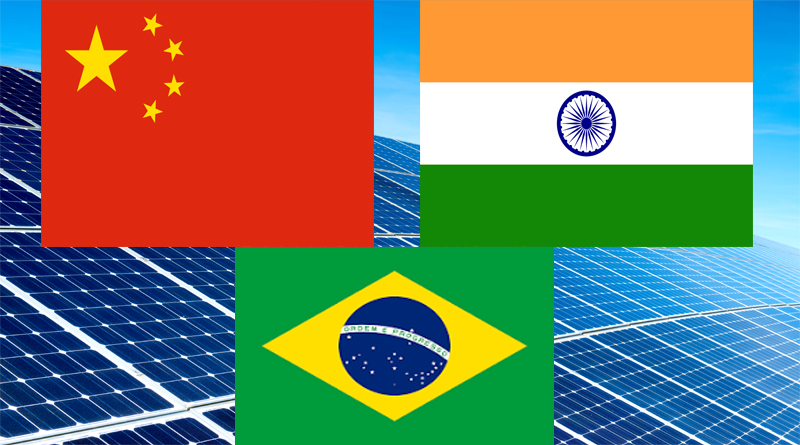 2017 might just go down as a watershed year for renewables investment.  This is the year when  emerging and developing economies overtook the developed countries in bringing in fresh quantum of investment on the table to expand their renewable energy capacity. This is the key finding of the report “ Global Trends in Renewable Energy Investment” recently brought out by UN environment in association with Bloomberg New Energy Finance and Frankfurt School.

According to the report, China, Brazil and India led the investment surge and on a cumulative basis these countries have committed a record $177 billion to renewables last year. As against this, the commitment made by developed countries stood at $103 billion which actually marks a drop of 19% against the previous year figure. In terms of total capacity commitment, the figure in 2017 rose to 157 GW which is over 9 percent growth over the 143 GW commitment made in 2016. Out of this 157 GW, solar power has cornered the largest chunk with 98 GW or 38 percent share of the fresh commitment. Among all the countries, China stole the show with a staggering investment commitment of $126 billion across the renewable spectrum. This is the highest ever single year commitment made by China in the renewable sphere and this time there is a visible tilt towards solar which accounted for $86.5 billion of total investment announced. “The extraordinary surge in solar investment, around the world, shows how much can be achieved when we commit to growth without harming the environment,” Erik Solheim, Head of UN Environment, said.

The brunt of the drop in investments seem to have been borne by Wind Energy worldwide.  Policy uncertainties led to a drop in energy investment in the US by as much as 6 percent. The fresh investment announced during the course of 2017 in world’s largest economy stood at $40.5 billion. The biggest decline was witnessed in Europe where renewable energy investment commitment declined by a staggering 36 percent to $40.9 billion. “ The biggest reason was a fall of 65% in U.K. Investment to $7.6 billion, reflecting an end to subsidies for onshore wind and utility-scale solar, and a big gap between auctions for offshore wind projects. Germany also saw a drop in investment, of 35% to $10.4 billion, on lower costs per MW for offshore wind, and uncertainty over a shift to auctions for onshore wind,” the report underlines. However, there was a surprise upswing (modest to large scale) in committed investment by some countries which haven’t shown much aggression in the past. “There were sharp increases in renewable energy investment in Australia, of 147% to $8.5 billion, in Mexico, of 810% to $6 billion, and in Sweden, of 127% to $3.7 billion. Just outside the world top 10, investment in Egypt leapt nearly sixfold to $2.6 billion, and that in the United Arab Emirates 29-fold to $2.2 billion,” the report added.

A new world order, anyone?