A familiar Risk Rises for India

A report brought out by global risk analysis firm, Verisk Maplecroft, places India in the extreme category, as far as its industry practices in renewables energy go. That might be more than a little surprising for many people in the sector, even as the country is primed for a period of high growth

One of the stranger aspects of the renewables push in countries has been the relatively low messaging around how ‘clean’ the industry is. Thanks to the Chinese manufacturing juggernaut, the focus has quickly focused to how competitive it is, and thus, the need for the sector to be respected for its economic logic itself. The green credentials were more of a bonus. But could the young and vigorous renewables sector be hiding its own secrets of human rights abuses?

A report on the renewables sector,  by global risk analysis and management firm Verisk Maplecraft seeks to put this reluctance into perspective.  According to the report, even as certain aspects of renewables production, be it the lithium used in battery storage, cobalt in the same battery from countries ravaged by war,  even the minerals going into solar modules  are the more well known issues, more ‘solvable’ issues like human rights impact in production and possibly even places where renewables are being installed, might be getting ignored.   In fact, the report warns that human rights could prove to be the achilles heel in the green credentials of renewable projects.

The firm reckons the industry owes it to itself to have a much more open and positive image on these issues, especially with green finance coming into vogue, that will put more and more of the industry practices under a lens. One might add that n this issue at least, beyond the supply chains, the renewables sector finds itsself arraigned against a very formidable sector like the oil, gas and coal sectors, which have vastly more resources to change the conversation around such issues.

Thanks to a still prevalent ‘startup’ culture  among renewable firms, they might be ignoring basic issues that firms in the enegy sector are expected to have in place, be it a human rights policy, a safe waste disposal protocol, sourcing and working condition protocols etc

China, with its history of excessive working hours and occupational health and safety (OHS) violations in the manufacturing sector,comes in for aspecial mention, thanks to its role as a top producer.  Workers’ exposure to hazardous chemicals, such as cadmium, in the manufacturing of PV panels has been cited as an urgent issue  given weak and inconsistent enforcement of OHS standards in China. 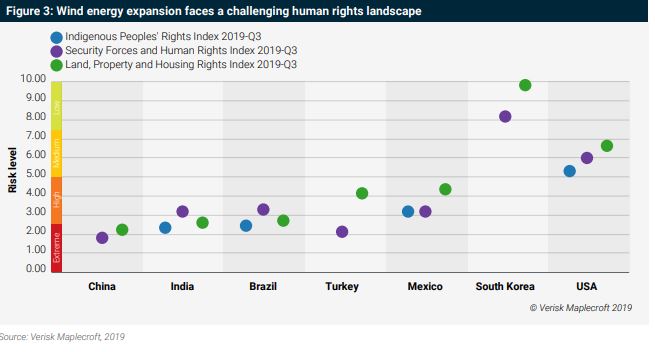 Sectors like Biofuels, which have faced well documented critiques for causing deforestation and land grabs to causing food insecurity,  also get a mention, for largely getting away under the green banner.

Overall labor rights scores are the worst for the cultivation of palm oil in Malaysia and Indonesia, along with sugarcane in India. Palm oil in Thailand and soy in Brazil follow close behind.

The use of migrant labor in India’s sugarcane industry and in the palm oil industries in Malaysia and Indonesia also increases the risk of modern slavery occurring, according to the report. Child labor has also been fingered  in the production of these crops in all three countries. Inadequate enforcement, corruption and a lack of political will to address these issues are key challenges facing these producing economies in tackling violations, says the report.

Outside of labor rights issues, companies involved in land-intensive renewable energy projects, such as wind and solar farms, face exposure to risks related to land rights violations that can create delays and disruption. 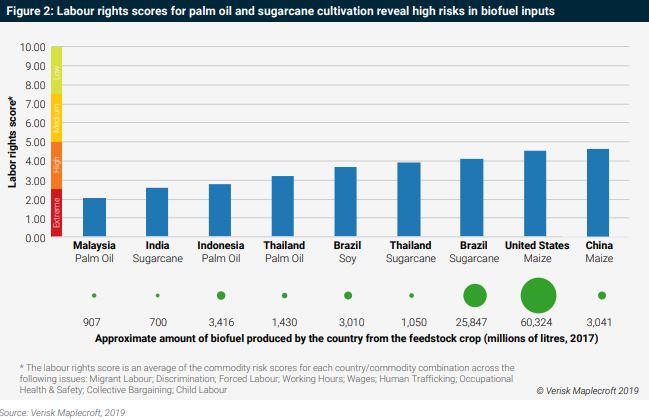 China, India, Brazil, Turkey, Mexico, South Korea and the U.S. are among the countries where significant expansion of the wind sector is expected in the next decade or so. Five out of these seven countries are assessed as “high” or “extreme risk” in the  indices covering indigenous peoples’ rights, land rights and security force violations.

Social buy in a key to project success

Major community resistance against wind farms, besides other solar and hydropower projects, has resulted in significant financial costs to renewable sector investors. The report cites the  cancellation of a 61-megawatt wind farm in Kenya in February 2016, a result of widespread community opposition, included a court case over the project location and resulted in a shareholder investment loss of $66 million.

While challenges in obtaining ‘free, prior and informed consent’ — the backbone of securing social license to operate — are significant, success stories have been recorded in high-risk countries such as Mexico.

For India, while issues related to land acquisition would seem to have been largely covered, thanks to the involvement of state government agencies in procurement, and a well defined land acquisition law, the other issues,   be it in manufacturing, operations or in the case of biofuels, production, remain, as those are  overwhelmingly in private hands. The government has not helped much, thanks to the relentless squeeze on prices along with a ‘startup’ like benefits to do as they please for the sector. Its a recipe with a high risk, as amply proved by the country’s poor ratings in the risk scale.

Thus, while it will always be easy to dismiss the report as an effort to shill up business for a firm in the business of risk, it woyld do absolutely no harm for the country;s many renewable energy participants to pause and check if they are doing it right. The right thing, the right way, that is. 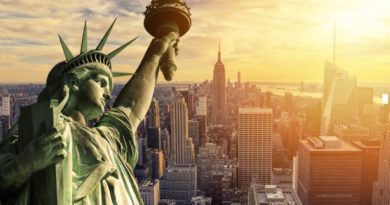 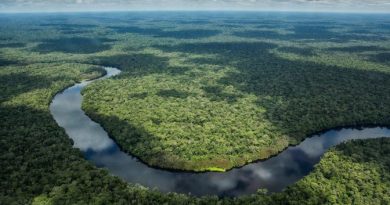